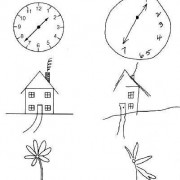 If we refer to the symptom, the meaning of hemispatial neglect corresponds to the inability to process information coming from locations at one side of the body. That is, an individual’s inability to consciously observe those elements that are placed to the sides of a “virtual” axis that goes through the middle of the head, from the forehead to the back of the head.

On the other hand, unilateral spatial neglect syndrome (as we will see in the next section in more detail) refers to a health condition that affects an individual who has an attentional disorder related with elements located on any of the sides.

In general, spatial neglect or unilateral spatial neglect, is a neurological disorder that makes a person that apparently has a normal level of consciousness, not able to recognize stimuli that are located on one of the sides of their body.

Just as we saw in the previous section, unilateral spatial neglect syndrome is a neurological disorder that can occur after a patient has suffered a cerebrovascular accident or a stroke. In this case, patients will present a lack of attention and response to objects, individuals and other stimuli that originate on the side that is contralateral to that of the injury. It is even possible to see patients that do not recognize their own extremities (arms or legs) even though they have no sensory deficits.

In the majority of cases, spatial neglect is caused by an injury that affects the right parietal lobe, although there are many cases in which the injury can affect both hemispheres. Independently of this, the seriousness of the injury will increase if it takes place on the right hemisphere. The fact that an injury is located in both parietal lobes is extremely important because they are the central area for attentional control, spatial perception and personal navigation in the outside world. However, spatial neglect can also occur as a result of injuries in other areas of the brain, like the temporal superior, frontal inferior and middle gyrus, in the insula or in other subcortical structures.

There are several types of spatial neglect and we will review the best-known ones in the next section.

Attentional or sensory spatial neglect: this type of spatial neglect refers to an awareness deficit of any stimuli placed on the contralateral side of where the injury causing the impairment is located. This lack of attention can occur with different types of stimuli: visual, auditive, tactile; located in space or on the patient’s body. It can also depend on whether the stimulus is within the patient’s visual field or on its position with respect to the patient’s body.

Spatial Neglect: patients who suffer from this type of neglect “forget” to complete the part of a task that corresponds to the opposite side of where the injury took place. For example, a patient affected by this type of spatial neglect would only eat half of the food served on a plate.

Personal Neglect: patients do not recognize that their extremities, specially those located on the opposite side of where the injury took place, belong to them.

Intentional or Motor Neglect: patients do not respond to stimuli, although they are aware of them and have no motor impairments in the affected body part.

Just as we mentioned in previous sections, spatial neglect is one of the most frequent disorders suffered as a result of a brain injury. But, what are the main problems associated with spatial neglect?

In general, unilateral spatial neglect or spatial neglect syndrome tends to affect considerably an individual’s level of functionality. Patients affected by spatial neglect will see how performing the activities of daily living, both basic and instrumental (or advanced), becomes affected, showing difficulties in their performance or even not being able to do them at all. A few examples of the problems patients can encounter are:

Personal Hygiene: combing, shaving or putting make-up on one side of the face. The same thing happens with brushing one’s teeth.

Bathing: using soap or drying one side of the body.

Getting Dressed: having difficulties placing a garment with respect to one’s body or wearing a garment in only one side of the body.

Eating: scooping food from one half of a dish and not finding those elements that are on the affected side.

Using Public Transport: having problems to understand a bus or train timetable and difficulties orienting oneself or getting down at the desired stop.

In general, the majority of the rehabilitation tasks or activities used for spatial neglect are compensatory techniques or tasks that force patients to pay attention to the affected side. Below we will see some examples of the activities that are normally used:

Furthermore, treatment will be more effective if several techniques are used and clinicians alternate among them for their application.

As a result, the use of Rehametrics will be very useful to deal with spatial neglect. Our platform contains several physical rehabilitation exercises implemented in virtual 3D environments. These environments simulate a street, a mountain, a living room, etc. and will present stimuli on both sides of the patient’s body. Moreover, using the multiple personalization options available in all the rehabilitation exercises within Rehametrics, clinicians can select on which side of the screen they want stimuli to appear, forcing patients to interact with the side that is normally omitted.